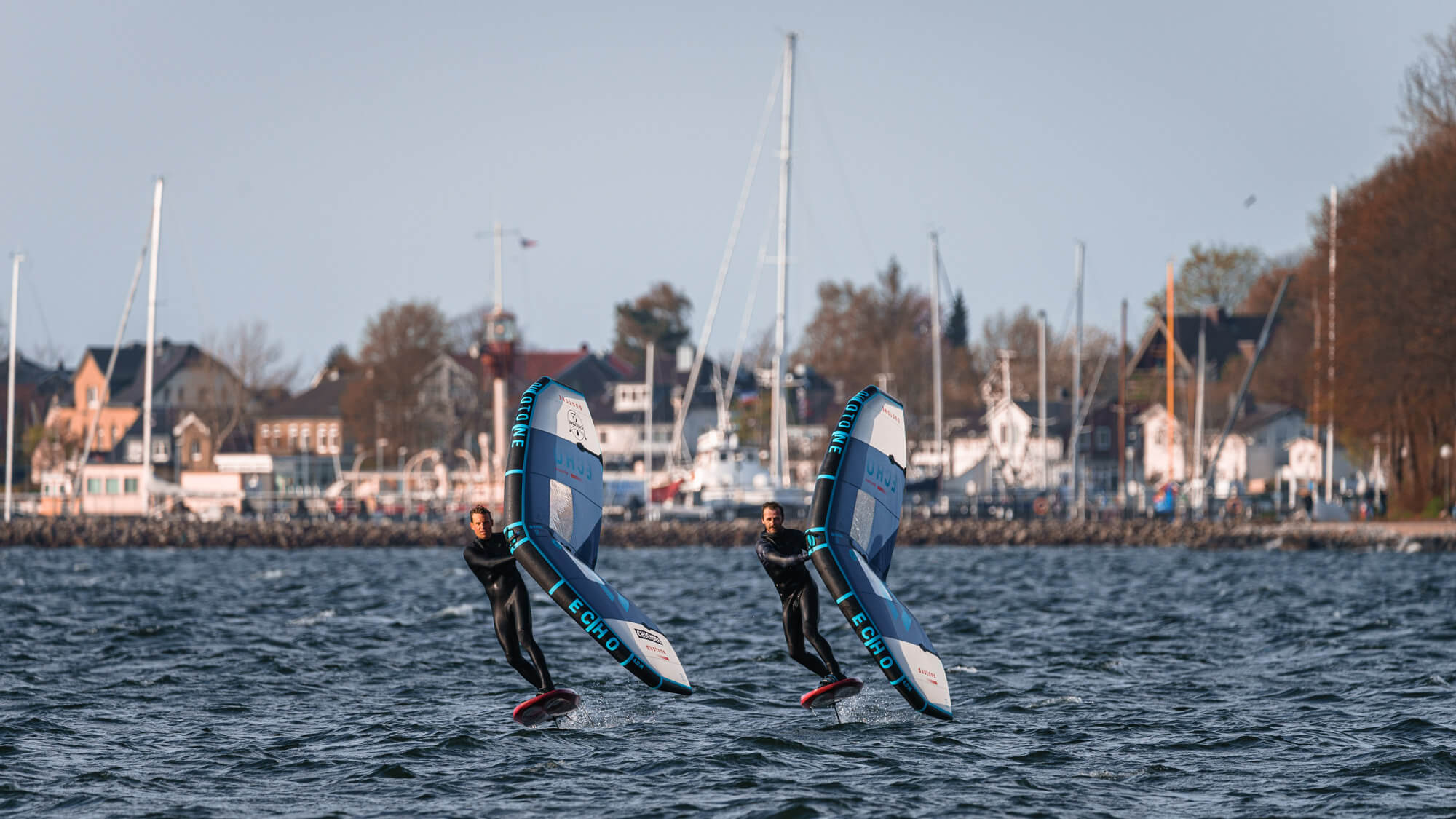 If one trend has moved the water sports world this year, it is the „Wing Thing“ aka Wing Foiling. You see them at every bay or lake these days and  is interesting that many celebrities like Kai Lenny, Philip Köster or Robby Naish are regularly seen with it on instagram and that also companies from the kite sector produce the wings (ours are from Duotone). Simply put, a wing is also closer to a kite than to a windsurfing sail in terms of processing. The hype is big at the moment, even though the attractiveness of watching it is actually very limited.  In this interview our German Fanatic pioneers Henning Nockel and Klaas Voget will explain a bit more about it. 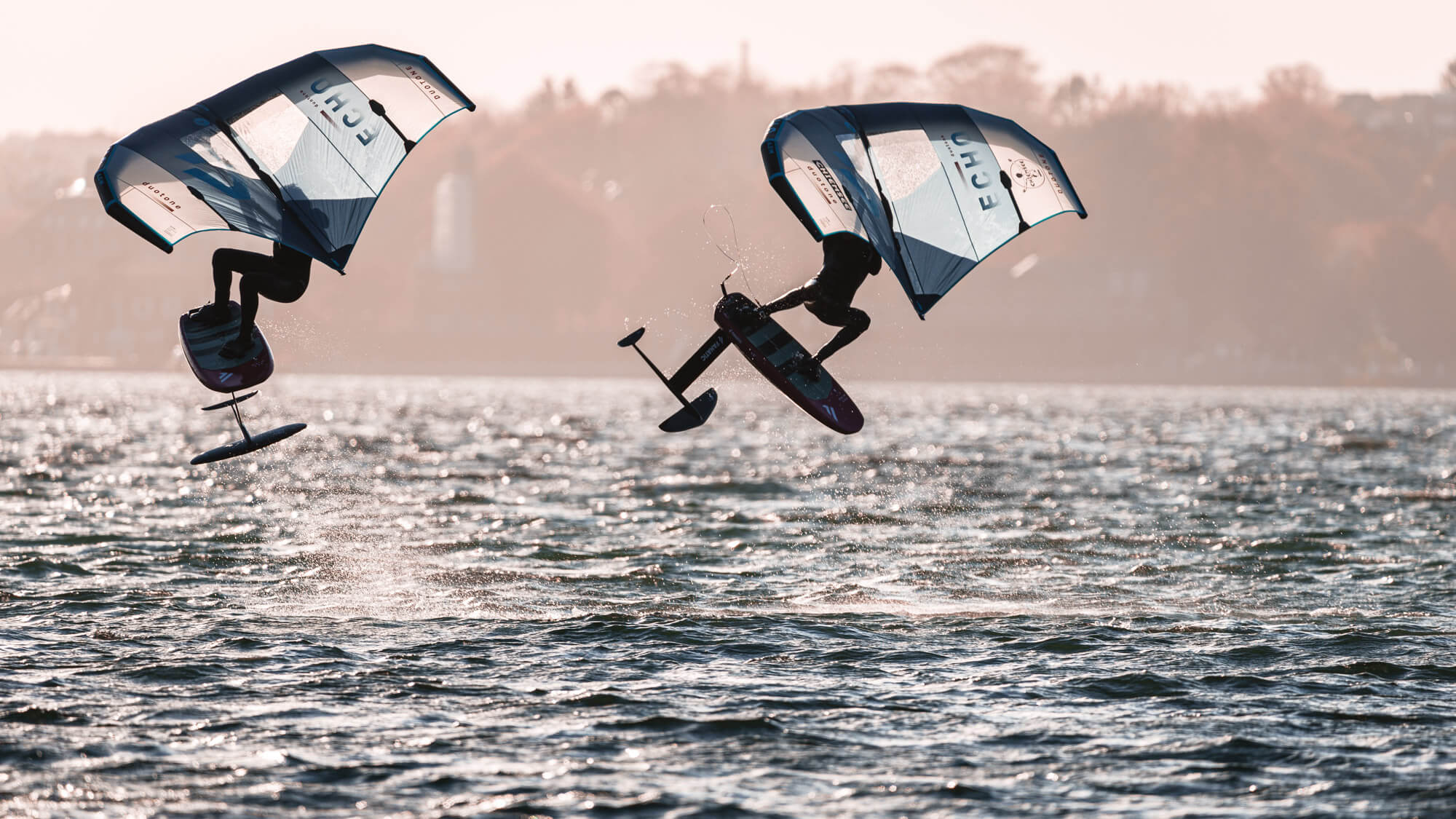 For everyone who is halfway informed or has been windsurfing for some time, this is not as new as it seems. Already in the 80s there were daring jumps and racy jibes with such wings. But back then the wings were made of Dacron and had an Aluminium mast, the whole thing was quite heavy. Nowadays it only needs a pinch of kite fabric and a pump, and the wing floats in your hands. Pretty simple.

How does it work?

The wing, which in earlier versions was supposed to make a board glide, is only now becoming interesting again with the rapid development of the foil disciplines, because when foiling, the friction of the board is eliminated, which means that much less pressure is needed to get going. Once on the foil, the wing is your engine that is held freely in the hands and can be steered in the wind with more or less angle of attack, depending on your needs. Because of the rather low pressure no harness is needed.

Henning, the Wing fever has also seized you, how did it come about?

I am so hooked on the Wing thing, you can't imagine. The reason for this is probably to explain that it is something you can do easily in all kinds of conditions. It is also the fascination of learning something new.

If you had to draw a comparison, is it closer to kitesurfing or windsurfing?

So basically I think windsurfers find it easier to learn winging with their experience. Is it therefore more similar to windsurfing? I think not. I once windsurf foiled and also foiled a couple of times with a kite. Personally, that didn't appeal to me that much.

If windsurfing foils didn't pick you up, then why Wing Foiling?

Wing Foiling is awesome! I haven't been on the water that much in years. This year I spent hours and days somewhere alone on the water without missing anything! You can get so creative and work out your own moves - exactly what I love about the sport.

New manoeuvres don't just come along, you just try things out and see if they work?

When I go out here on my doorstep in Kiel or somewhere on the lake, I sometimes just go back and forth in an area of 20-80 meters and practice one maneuver after the other. It's best if everything is lined up smoothly! It is so cool how you can get lost in it and how much fun it is when everything becomes fluid. For me the „Wing Thing“ is a total style thing. If it does not look good, you can forget it. It must look feline and free! I am already excited when I try to explain it : -)

Klaas, what's your attraction to the „Wing Thing“?

Before I had these wings I started surf foiling the year before, which fascinated me from the beginning. To ride a wave endlessly on the foil for the first time is almost like planing with a windsurf board for the first time, it has a certain potential for addiction. I always had my foil and foil board in my luggage last winter and every windless day in Cape Town and Chile I was looking for the "worst" conditions – soft rolling waves that ripple over the sandbank at high tide - to be able to foil. When I had a foil wing in my hands for the first time in March 2019 it was immediately clear to me - this is my ticket for the Baltic Sea and for every lake in general. Because the wing provides the power you need when the wave stops pushing. When you're surfing, you start pumping - which is incredibly exhausting - or paddling. With the Wing the flight becomes endless and completely relaxed. You don't even need a wave, the feeling is quite similar. So I wouldn't compare Wingfoiling to windsurfing or kiting, but rather to surf foiling. The whole thing starts even below 10 knots and I am now using a tiny board around 5’0” in a wind range that was totally uninteresting for me as a wave windsurfer. Because the wing is free to move and you are standing directly above the foil, the feeling is more direct than with windsurfing foils and also freer to manoeuvre. It's a bit more technical in the beginning, but with the right equipment and instruction you can make progress quite quickly. The wing itself delivers exactly the right pressure you need for foiling and is so light that it is mostly carried by the wind. Therefore you don't need a harness even for longer sessions and you can keep the wing completely neutral in rolling swell sometimes for hundreds of meters and only foil by the energy of the swell.

How do you see the future of Wing Foiling?

I think the whole thing will evolve rapidly and there will be a core scene that will do this sport more radical, with jumps and rotations and accordingly small boards and wings with a lot of power. But most people will do it as a lightwind alternative on flat water and in small waves or just cruising. With our Sky Wing models we do have a dedicated Wing Foil board range and especially in combination with our Aero High Apect Foils the gear already works insanely good, but I’m sure there’s much more development coming in the gear for wing foiling. I am very curious how the whole thing will develop.

Henning, where do you think the future will lead us?

It's different, a new challenge, works even in the worst windsurfing conditions, and very well. If you want to get on the water a lot and have time, this is definitely a great thing and a new challenge!

Henning and Klaas are obviously enthusiastic, and both are known for having a good sense for useful toys. The country where the first trick and jump videos came from was France. The fact that Wing Foiling made the jump from freeriding to freestyle so quickly can probably be explained by the fact that this is the first water sport that can use any social media source as a breeding ground. The Wing Foil trend will certainly last and not expire like a discount offer after two weeks! 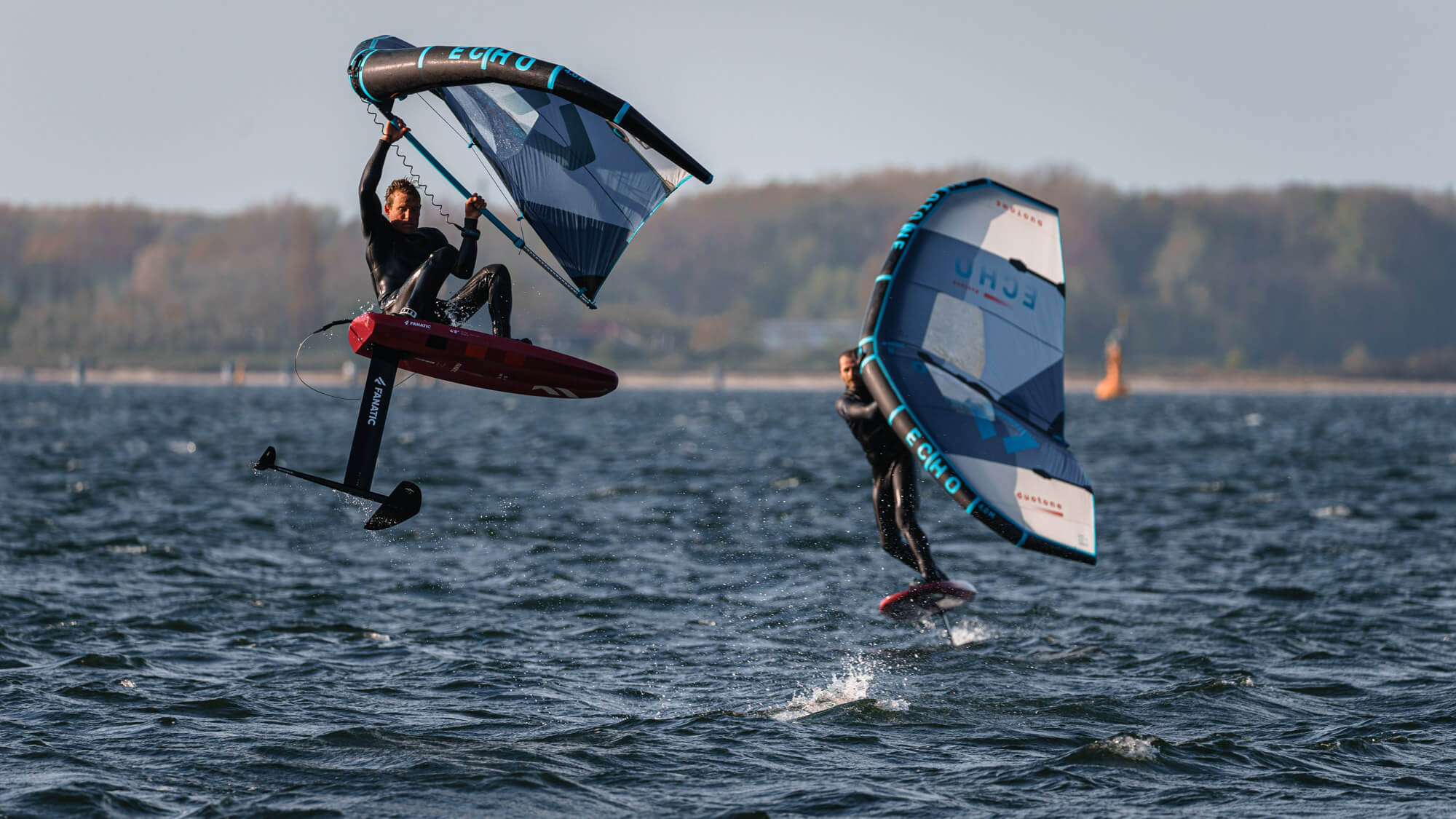 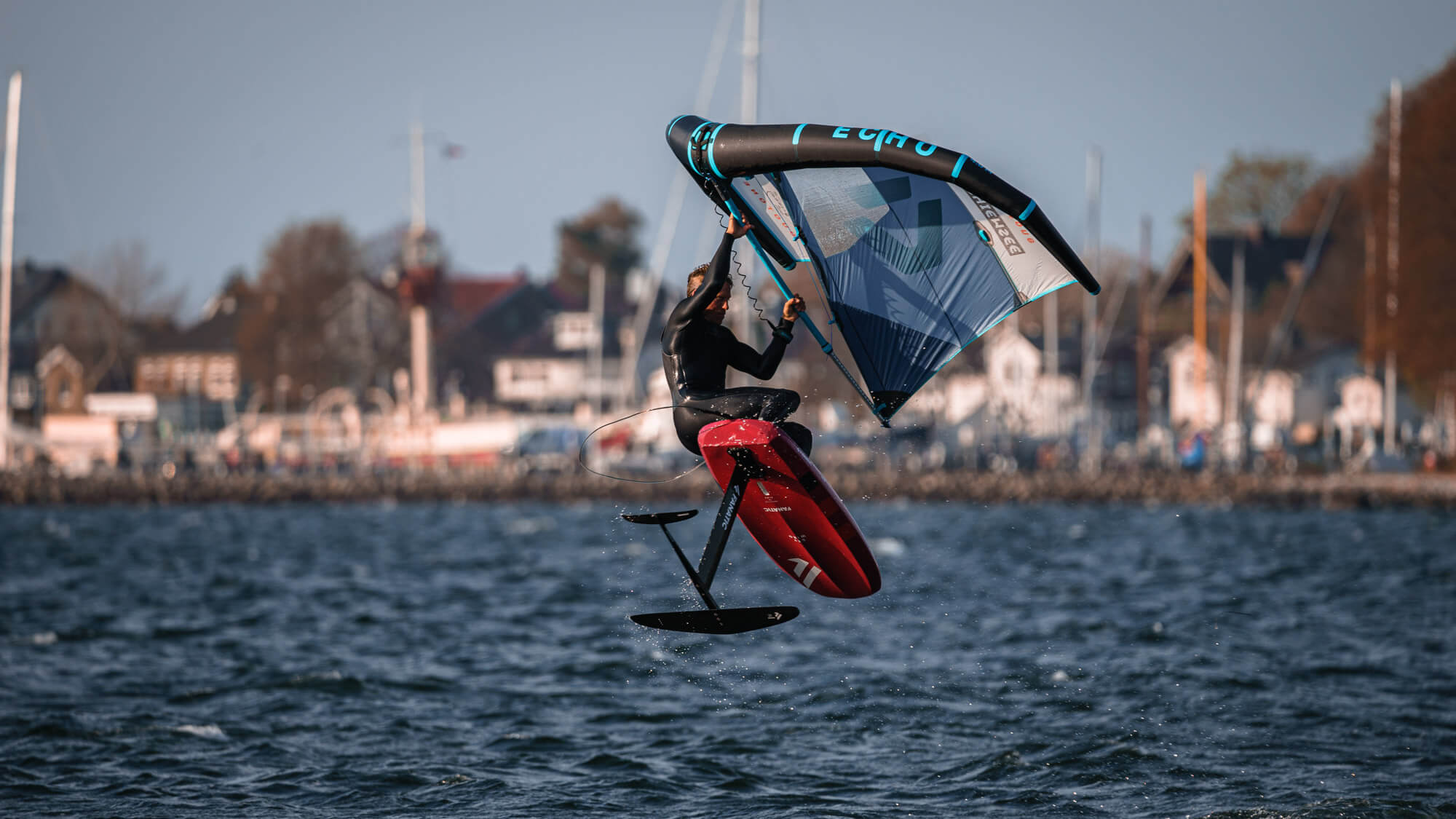 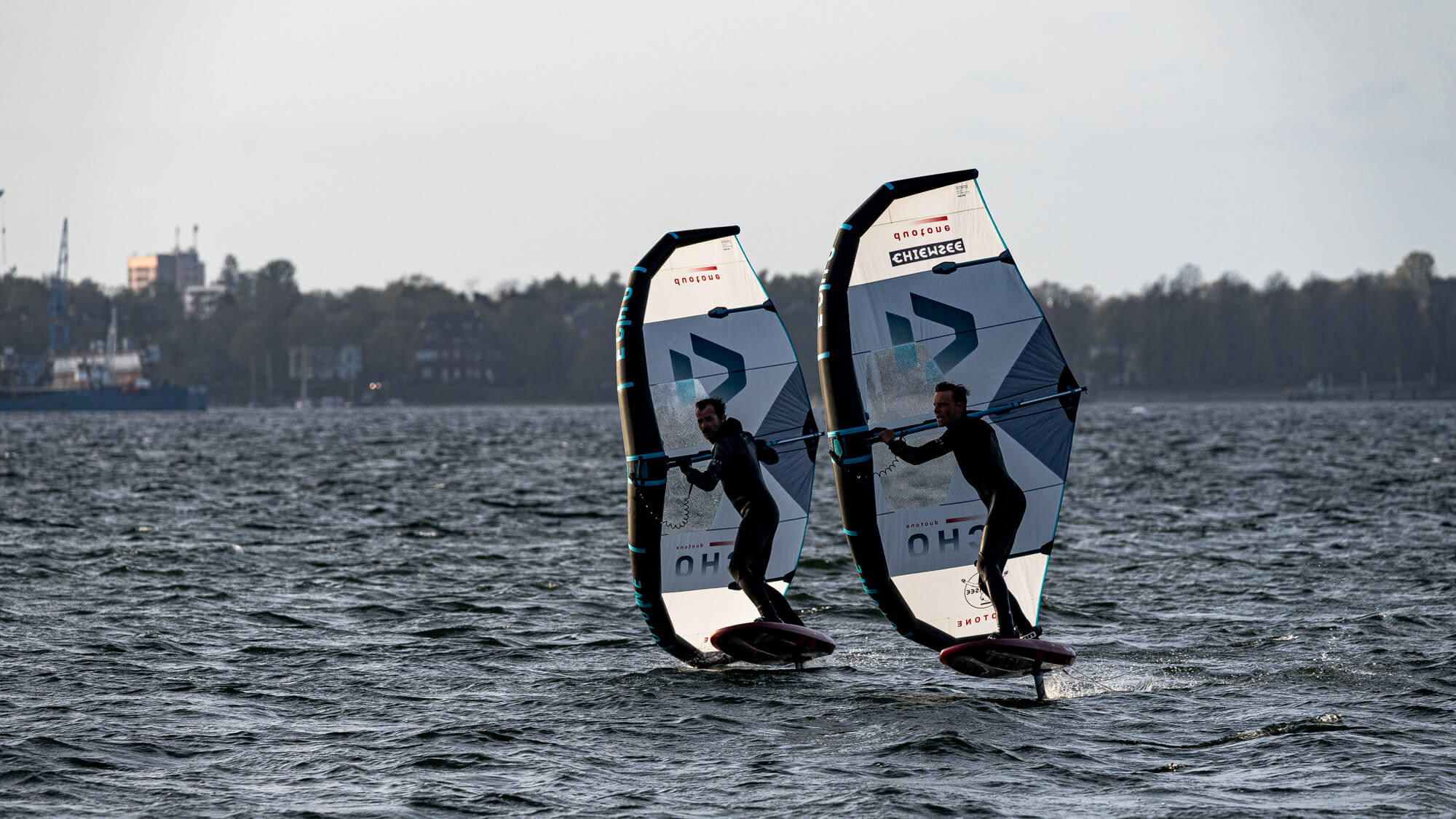